In pursuit of our mission to perpetuate the joy of hands-on learning, we are constantly working to make our classes more accessible to the community. To that end we are changing our class fee structure and our membership program.

Starting with our classes in September, we are moving to single rate pricing for all of our courses. Instead of having different rates for members and non-members, we are going to have just one low rate available to everyone in the community. We also are developing our scholarship program to make classes available to students of all means. We’ll be posting more details about how to apply for a scholarship, as well as an easy way to make donations to our scholarship fund on our website soon.

Memberships have always been about affirming your commitment and support of The Folk School. We use funds raised from memberships to support our programming and keep costs as low as possible. To better reflect this commitment, we’re modifying our membership program so everyone who donates more than $50 is included as a member of The Folk School. Starting in September, members will receive our Annual Report, our newsletter, access to members-only events, 10% off Folk School store purchases, and Folk School Library privileges. More information about making a donation and about the benefits of membership is available on our website.

Gordon Williams
President, Board of Directors

A Folk School class, taught by Randy Brown, recently built a 20 foot long birch bark canoe over nine days, starting at the end of June through the first week of July. During this time period there was a relatively constant flow of people streaming though Pioneer Park. Many of these people stopped by to examine the work and ask questions about the canoe and the materials being used. There were children and adults, some local and some from other states and countries. They were able to see how roots were used and to handle pieces of the thick bark 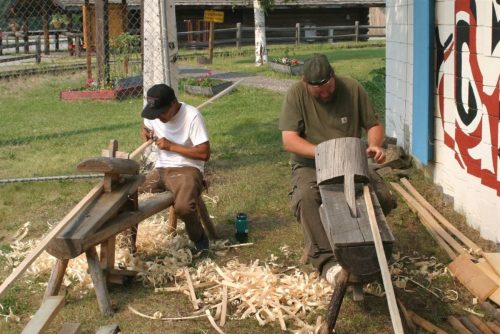 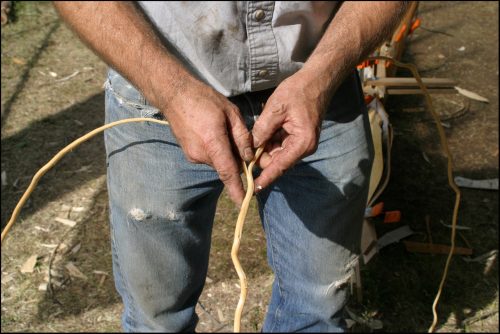 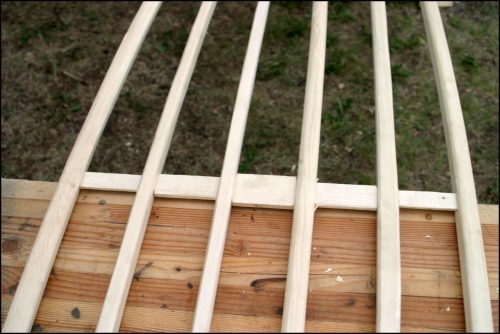 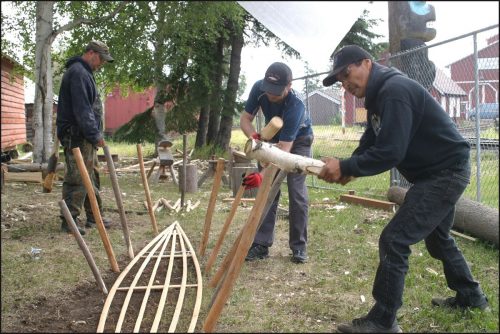 Randy Brown led the class of five builders (he led a similar birch bark canoe class in 2013). The five students worked diligently each day using classic hand tool methods to shape and fit white spruce gunnel pieces, thwarts, and the bottom frame. They split five foot sections of green spruce logs for rib material. They learned how to use draw knives and spoke shaves with a shaving horse to shape, thin, and corner all the wood pieces. They also collected spruce roots and pealed and split them for lashing and sewing material. 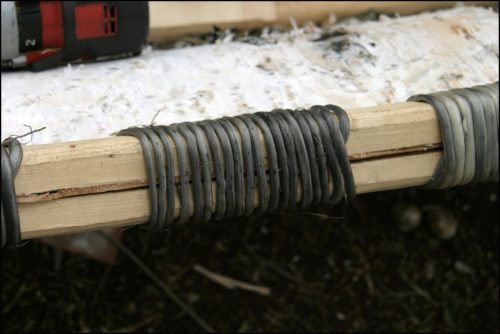 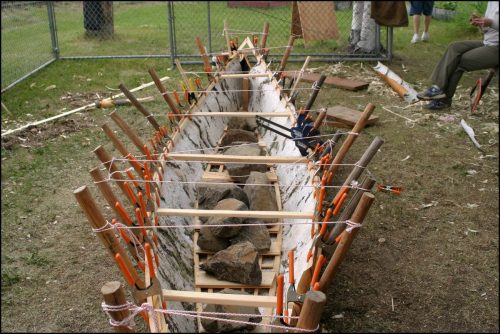 Bark on the building bed 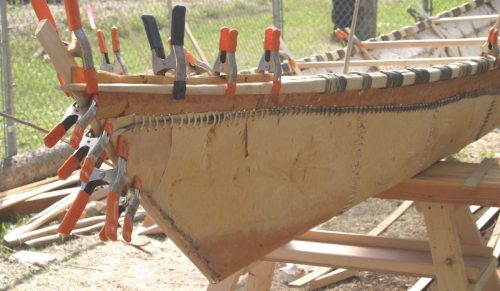 Once all the wood components were ready, the group traveled to the woods to collect large sheets of birch bark and compiled them on the building bed, where all the pieces would be held in place for sewing. They steamed and bent the ribs and eventually wedged them up under the inwales and pounded them into place, stretching the bark tight. They sealed the seams with spruce pitch, and paddled the canoe in the Chena River. Several other folks who had gathered to watch took a turn as well.

Although the class used modern hand tools in the building process, the materials in the completed canoe are the same as they were when built by the people who lived here long ago. 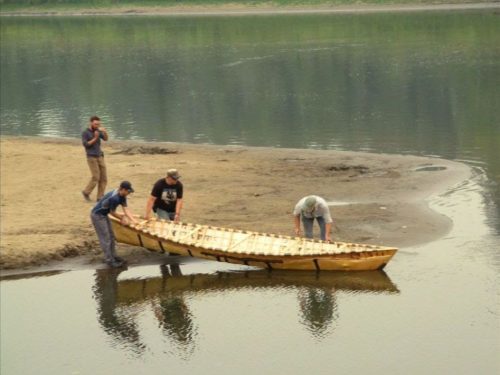 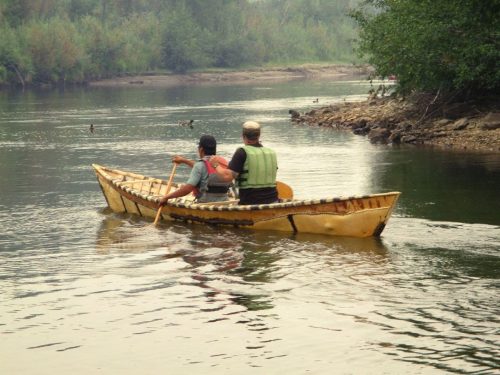 Help Put On the Wooden Boat Rendezvous in August! 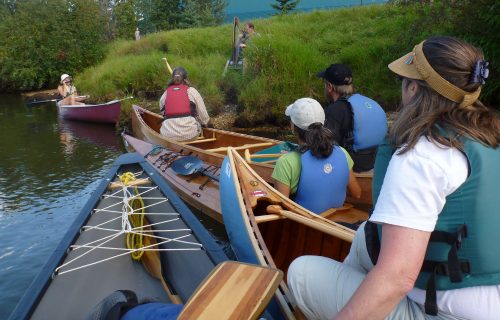 On Sunday, August 4, 2019, in partnership with Fairbanks Paddlers, The Folk School is pleased to bring back the Paddlers’ Wooden Boat Rendezvous. This is an event that the Paddlers hosted until a few years ago, and we’re pleased to be working with them to make it happen again. You can find the emerging details on the Wooden Boat Rendezvous event page.
It’s the perfect partnership: The Folk School helps people learn how to build boats, and the Paddlers, well, paddle them. Any kind of non-motorized boat is welcome to participate, whether it is wooden or you built it, or not. It’s the perfect event to show off your boat, including for those of you who have been building pack rafts.
But to make the event happen, we need help, both over the next few months planning and organizing it, and on the day of the event. Right now, we’re looking for people willing to coordinate a few things:
None of these have to be huge, time-consuming tasks, and you’re welcome to solicit help and delegate responsibilities to lighten the load. We have some broad outlines of what each of these will entail, so let us know if you have any questions. Email programs@folk.school and let’s make this happen!

The Folk School is looking for a volunteer who has curious hands, and good writing and photography skills, to help us document some craft projects we’ll be featuring at The Folk School Store this summer.

Please contact gordon@folk.school if you are interested in learning some new crafts and documenting the steps involved in making them. (We’ll help with the technical side of things, including page formatting and photo editing, if you need it.)

The Folk School of Fairbanks is looking for motivated and friendly people to staff our Summer Store in Pioneer Park this summer. Duties include:

The successful candidate will be passionate about The Folk School’s mission of sharing the joy of hands on learning. We seek an individual who is organized, conscientious, will interact well with the public, and have experience with or a willingness to learn about the proper use of power tools. Position will also require basic computer literacy. Retail experience preferred, and a background check is required.

Work schedules of up to 40 hours per week are available. Salary will be $10-12/hour depending on experience and familiarity with The Folk School.