Week in the Woods 2015 Session Highlights 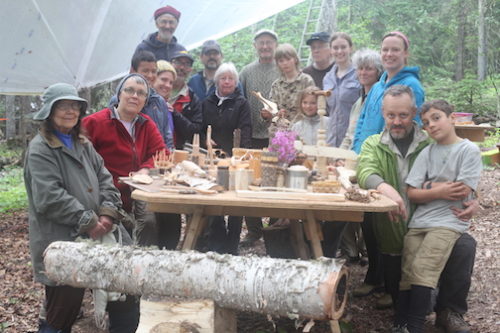 Our 8th year of Week in the Woods was our smallest group so far. This small group, however, proved to be a dynamic, vibrant, and fun bunch of folks composed of both returnees and new campers. This small group allowed a flexible, relaxed schedule, and lots of one-on-one time. This year’s extremely dry summer meant that we couldn’t use chain saws or any fire. Though it rained the first few days of camp, the fire ban wasn’t lifted until the second-to last day. Even so, we all circled our chairs around the stone-lined fireplace at meals, during our spruce-root peeling marathon, and for playing music. 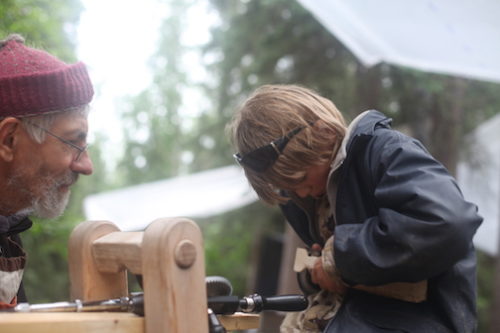 We returned to the blessedly flatter ground of the campsite at 8-mile, and our wonderful staff looked much the same as other years. These talented and devoted folks continue to be the heart of WITW. Marianne, Richard and Carolyn have been with us since the very beginning. Mary and Tim have been involved for the past several years. Sara and Christin were new this year. As times change, we all grow older and the demands of our lives and families change; so does the makeup of the WITW family. For the first time since the beginning, Becca, Mac and Van did not join us. Charlie, who has been with us all but the first year, did not join this year. 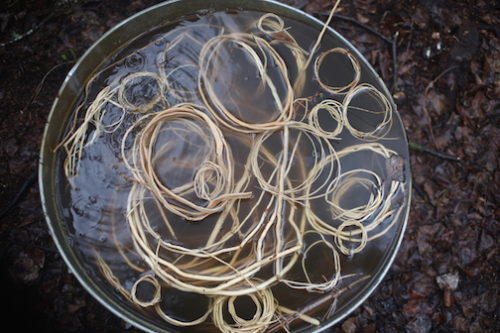 We continued to work and experiment with the Week in the Woods staples of birch bark, wood, and spruce root, and even added some new materials to our repertoire, such as spruce bark strips and fireweed fiber. We settled in the rhythm of the woods. Carving novices created the requisite spoons with Jon, bark enthusiasts stationed themselves at Mary’s table. The spring pole lathe was installed at the top of camp. Continuing last year’s tradition, Scobie and Steve put up the big swing, and everyone swung on it. Tim carved cars with lathe-turned wheels, and set up the race track for the car race. Richard taught knife handle making and truth fabrication. Marianne worked her magic, teaching bug-carving, chip carving, and making egg paint, as well as facilitating the theater piece and bringing many craft options to the table. Carolyn and Christin took us on a mycology walkabout. We telescoped together and apart, pursuing independent projects, then coming together to share what we had learned. 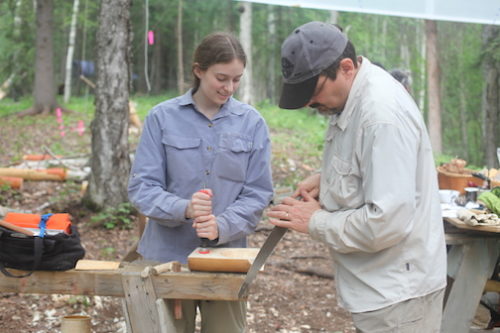 In an unforeseen twist, we found remains of the work of campers from previous years in the duff. A highlight of these treasures was “Tobin’s turnip,” a bulb-shaped bobble of turned wood with three willow leaves poked in top. We spruced up an old puppet stage for this year’s theater. We curled the tight ringlets of old birch bark strips around our fingers, reminded of the physical and temporal connection to this special place.

A Week in the Woods Poem:

Lichens, cones, and willow switches,
We keyed out the forest’s riches.
Witches butter, slime mold frocks,
Foraged fungus, woody conks.
We sliced, snacked, spitted, and cooked
We peeled, split, sawed, and looked.
Fluted, hooted, howled, and whooped,
And coiled skeins of fragrant root.
A curious turnip on a wooden stump,
A lathe-turned wheel, a corky lump.
Prying wedge and sharpened stick,
Sugared cambium to lick.
We raced, twisted, plied, and spun,
Plaited, plated, poured and punned.
Swung in fun and contemplation,
Discussed physics of aviation.
We cut and crafted,
Strung and hafted.
Measured, graphed,
Joked and laughed.
So weave, cleave, carve, and bevel,
Bend, ret, boil, and be clever,
Make a mistake or make up a stitch
There’s mayonnaise to clean the pitch!
See an awesome alder’s recurved bough
And envision spoons sleeping within,
Sing our songs and save the dates:
June 25th through 29th, 2016!