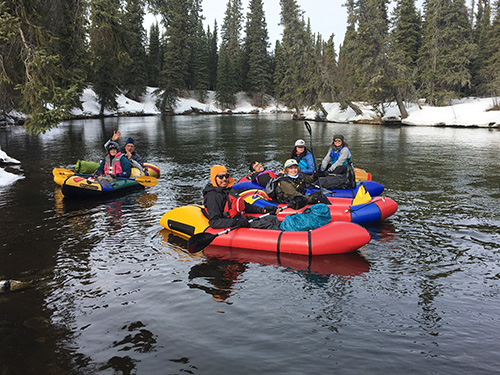 This Spring Folk School packraft instructor, Bruce Campbell, and Prince William Sound College (PWSC) outdoor skills instructor, Benjamin Rush, accompanied 5 PWSC students on their first packrafting venture. Benjamin and students spent the Spring semester building DIY Packrafts from kits, with Folk School support via Zoom and the occasional video phone call. Some students finished their packrafts and those who had not yet finished borrowed some of Bruce’s packrafts to float the Clearwater River. 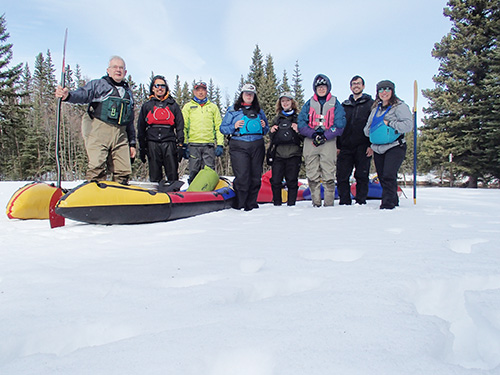 Their previous excursions included sea kayak trips, ski and overnight camping on Worthington Glacier, and other snow camping, so the class was not the least phased by the snow blocking the access to the Clearwater river. After a night of camping on the ice and snow at the unplowed entrance to the Clearwater State Recreation Area, the group packed gear into their packrafts, shuttled cars, and slid the rafts across the snow, post-holing their way to the boat launch. 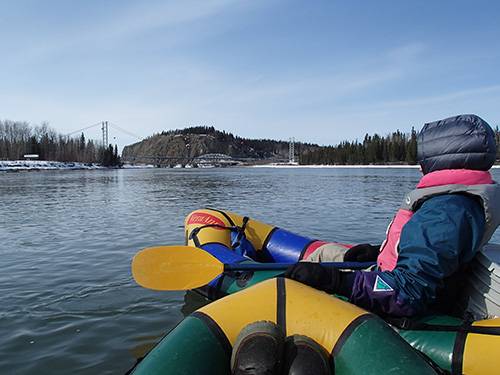 The day offered clear blue skies and wonderful bright sunlight streaming through the spruce. Following a safety discussion, they slid the packrafts into the clear water and were off. Schools of whitefish passed underneath, skeins of swans flew overhead, and they had the river all to themselves. Students survived a floating discussion about the Clearwater fault, groundwater and melting permafrost, accompanied by thick river ice, forming the various features of the river, white spruce vs black spruce, and much more.

The group camped on a mix of ice, thawed ground, and gravel bar. PWSC students, used to backpacking and sea kayak limits on gear, were really good at packing light. So they got an eye-full as Bruce extracted his folding camp table, folding stools, kitchen, and an endless stream of gear from the same sized packraft. Packrafts can carry an impressive amount of gear, if you’re not limited by having to carry it in a backpack. The equipment one can pack inside the raft is limited by the 50 mm long air-tight zipper = lots! And the craft handles much better when loaded.

Dinner was a Folk School event, Japanese Tempura in which everyone contributed to include: halibut, salmon, mushrooms, peppers, peas, broccoli, sweet potato, and more, cooked on MSR Stoves in deep Fry-Bake pans. 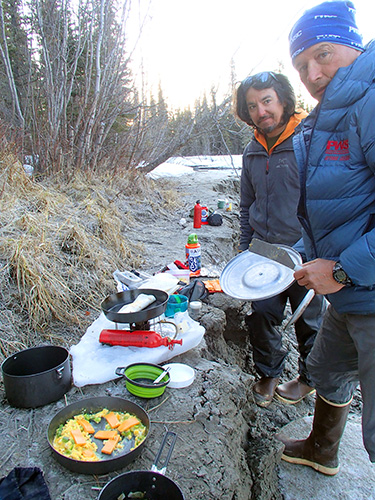 The next morning they passed the Clearwater Lake outfall into the Tanana, and made a partial attempt to paddle up the outfall current. Packrafts are not fast hull craft! It was clear that we would have had to pack our craft up and over the snow to access the lake outfall, and it would still have been a difficult paddle upstream against the current using packrafts.

Clear skies gave the group glimpses of the Alaska Range as they paddled. Moffit, Hayes, Deborah and Hess and even Denali peeked out for a moment. The Tanana was a clear green river. One could see bottom in several feet of water. While slab ice lay across the gravel bars, it did not prevent the travelers from pulling out and stopping for the occasional break. The river was fully open, just like the satellite imagery, dated 4/17/2022, had indicated. A lovely breakup trip on the Clearwater River! 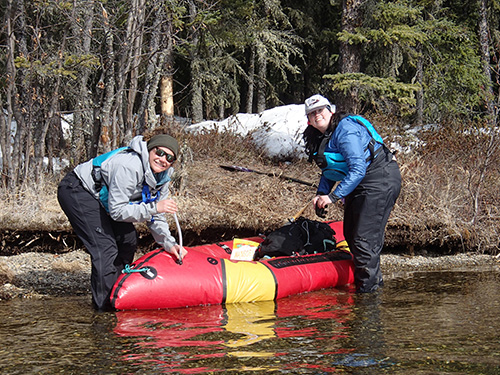